Who’s Deepak Chahar’s Girlfriend? What happened when Deepak Chahar proposed to his girlfriend after the match 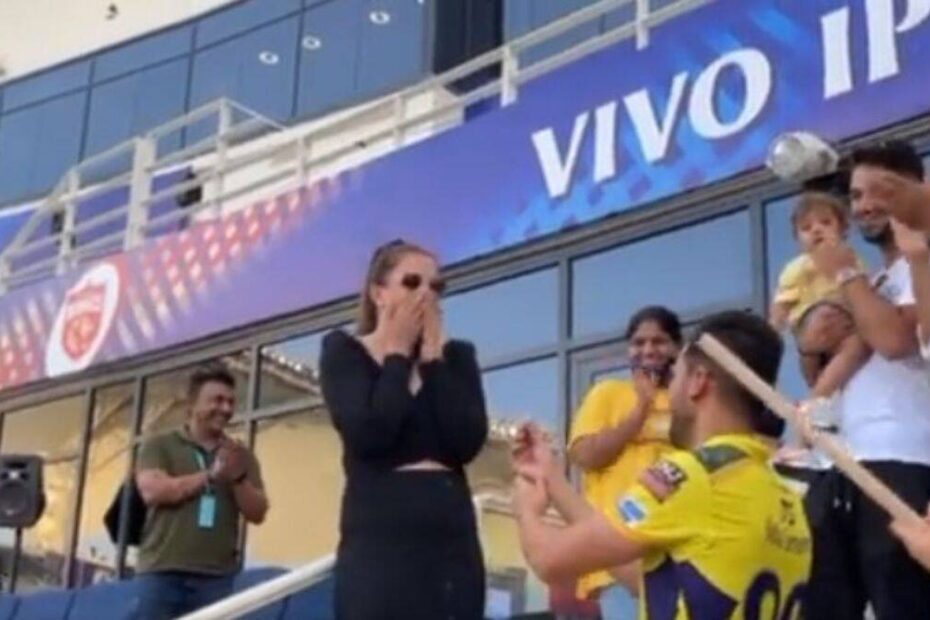 Who’s Deepak Chahar’s Girlfriend. What happened when Deepak Chahar proposed to his girlfriend after the match

Recently Deepak Chahar proposed to his girlfriend after the match played between CSK and PBKS. Deepak Chahar posted it on his social media handle and the video went viral on social media. This video is getting liked by millions of people. everyone is congratulating him for this wonderful moment.

In this match, Chennai Super Kings was defeated by Punjab Kings, however, this defeat did not bother Deepak Chahar and after completing the match he went to the stands where his girlfriend was sitting. He surprisingly bent down on one knee and proposed to his girlfriend who was wearing black dress and she replied yes to Chahar’s proposal. Chahar was congratulated by MS Dhoni along with Shakshi and other players. Later, Rahul Chahar and Malti Cahar congratulated their brother for this special moment during an ongoing match of the VIVO IPL 2021. Later, all the players of CSK gathered into a hall where the couple cut the cake and celebrated.

So the question comes who is the girlfriend of Deepak Chahar: – Well, her name is Jaya Bhardwaj. She works in a corporate company in Delhi. She has been cheering Deepak Chahar in the Vivo IPL 2021. On this match she was cheering from the crowd and who would have thought that she turned out to be the girlfriend of Deepak Chahar. She is the sister of Sidharth Bhardwaj who is one of the contestants of Big boss. later Sidharth gave his best wishes to the couple on his social media handle.

Latest update on this news: – According to the latest news Deepak Chahar was supposed to propose to his girlfriend during the playoffs however he had to propose to Jaya after their match against Punjab Kings after being advised by the captain cool MS Dhoni. After this incident, Chahar and his family members are extremely happy. In an interview, Chahar’s father said that both the families will decide the weeding schedule for the couple shortly hence the couple is ready to tie the knot. According to some sources they both are in a relationship for a very long time however they never disclosed it to the public. According to some news, Deepak Chahar has already introduced his Girlfriend to all of his CSK team members before his public proposal. When Deepak proposed to his girlfriend people thought that she is a foreigner, however later Deepak’s sister Malti Chahar cleared it out that is Deepak’s girlfriend is an Indian who belongs to Delhi.

CSK gave a target of just 135 to Punjab Kings which they achieved on their 13th over. CSK has already qualified for the playoffs and despite losing the match their position has not been changed. We hope that the lady luck of Deepak Chahar’s girlfriend continues in the playoffs and wish both of them for bright and wonderful future.