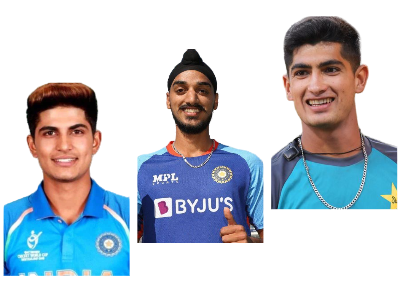 Nobody doubts about Shubman Gill and his batting technique. Shubman has emerged as a prodigy since the 2018 under-19 cricket world cup. It was the dawn of his cricket career as he was about to be selected by the Kolkata Knight Riders for the Indian premier league. A little later on, he was selected for the Indian team and became a part of the Indian team for the Border Gavaskar series. He has got good got power hitting ability which given an upper edge over any other batsmen.

Shaheen Afridi became a cricket sensation in the 2021 T20 world cup in which his performance was remarkable. Shaheen is considered to be one of the best fast bowlers Pakistan has ever produced. Shaheen destroyed the entire Indian batting lineup in the match played by India and Pakistan.

Arshdeep Singh is a young Indian fast bowler who has recently made an impression in the 2022 T20 cricket world cup. He is good at death overs, we all witnessed the same in the last T20 world cup. Earlier, Arshdeep Singh was criticized by the fans as he dropped a crucial catch in the match played between India vs Pakistan in the 2022 Asia cup. Despite all the criticism, Ashdeep Singh emerged as a champion and showed a remarkable performance

Ishan Kishan is at number 3 on our list and there is no doubt about his sheer ability. Ishan Kishan was bought by Mumbai Indians in 2022 as they paid a staggering amount of 15.25 crore for the 2022 IPL. Other than IPL, Ishan Kishan lead team India in the 2018 under-19 world up in which India were able to clinch the mighty world cup trophy. He has got good power-hitting ability with batting technique. Also, he can help India while chasing down the target.

Pant is an emerging young talent of India who is known for his fearless batting style regardless of the format and opponent. The most attacking and versatile young player on the team is going through the best period of his time. He has scored some amazing knocks against England, and Australia on their home soil.

Iyer is a young talented player having good technique and temperament on which the middle order can rely upon. He’s been doing pretty good with his form over the last few years and is most likely to be a part of the Indian team in the cricket world cup 2023.